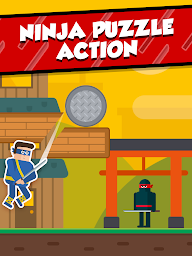 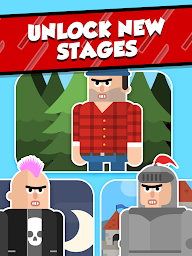 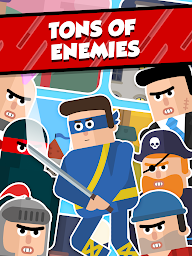 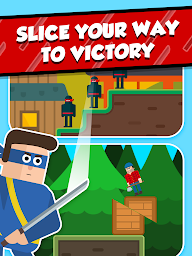 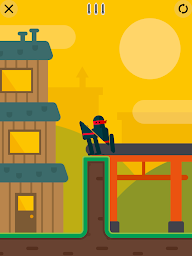 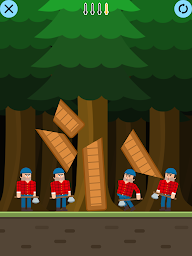 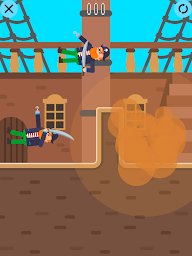 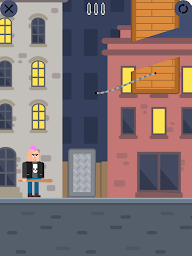 Mr Ninja MOD APK (Skins Unlocked) is a puzzle game with creative gameplay and can bring you moments of fun entertainment.

Shortly after its release, Happy Glass received hundreds of millions of installs on Google Play. And this has made the name of the publisher Lion Studios. As a driving force for creativity, they continued to launch another game called Mr Ninja. How to play it? We will learn in the below part of the article!

Mr Ninja sets the scene when Japan is affected by bad things due to the illegal activities of gangsters. They even cause fights often, causing people to live in fear. As a ray of hope, you appear to free them by destroying these gangster organizations, including assassins and ninjas.

In order to kill a ninja, you must be a ninja. You only have a sword. Your enemies are so good at defense, even that you can’t touch their body. Because of this factor, you have to find other ways to become the last to survive in a battle.

Can you see the wood? They are easily cut into pieces. If you could cause it to fall on an enemy or cause it to fall from above, enemies would die. What about the iron bin? Your sword has no effect at all in this case. In this case, find the bombs and detonate them. The range of effects of explosives is enormous. They are all placed in a dangerous position so you can finish the enemy. But sometimes, it can also be hung up and you have to cut off the rope in order for the bomb to fall to the desired location.

When you reach a higher level, it is also time you face more difficulties. Bad ninjas appear in a position that is harder to kill, while wood and bombs appear less frequently. The hostage hostages also appear at some levels. You need to remember that your most important goal is to rescue them. If unfortunately hurt them, you have to play that level again.

How to get Fantastic?

Every time you complete a level, Mr Ninja evaluates the achievement that you achieve through a rating equal to one, two or three stars. The higher the rating, the faster the unlocking process of a new character and will give you more bonuses. Sometimes, you also receive a special item, Golden Katana, a sword so strong that it can cut any ninja’s sword and end their life.

But, how to get a high rating? This depends on the number of times you use your sword and how you kill your enemies. If it works and the game feels you deserve it, you’ll get all three stars.

Become the master of darts

As a ninja, you must not only use the sword proficiently but also have to combine with other weapons to survive in battles.

Let join the Ninja Stars mode. Here, instead of using your sword to fight enemies, you will use darts. Control is also quite simple, you touch the screen, then drag to aim, let go to shoot and kill all enemies. Slightly different, darts can bounce back when they come in contact with surfaces (ground or iron objects).

You can change the shape of your character and weapons through the use of skins. By default, when you start Mr Ninja, you will receive Mr Katana along with the Katana weapons set including swords and iron darts.

During the battle, the skins will be unlocked. Some of them are free but forces you to watch ads videos. I got Dr R. Hochet, Mr Katana and Mr Speedo after 10 levels. They look quite interesting in appearance and expression. As for the weapons kit, I used my money to buy them in the store. It was the Ranbow Wand, which looked quite similar to a magic staff attached to the golden star. The color effect when this weapon collided with the enemy looked very nice. In addition, the game also has Poisonous Sting, Trident of Poseidon, or Bloody Hax.

Skins Unlocked: With the MOD version, you can freely shop and unlock skins for Ninja. All skins are free to unlock!

I like simple games that are very entertaining like Mr Ninja or Happy Glass. It gives people relaxation and makes boring moments more meaningful. If you’re looking for something like that, Mr Ninja might is the answer!

How can Noadware.net guarantee 100% security for the Mr Ninja - Slicey Puzzles Mod APK?

Is it safe to download the Mr Ninja - Slicey Puzzles Apk Mod file from Noadware.net?

One Way: The Elevator

Doctor Who: The Lonely Assassins - A Mystery Game