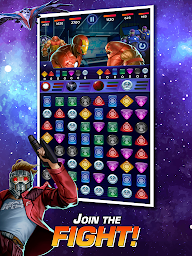 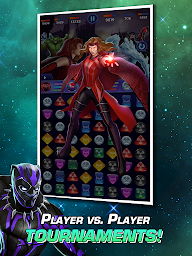 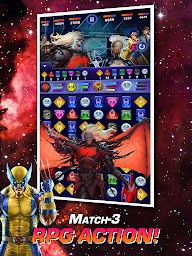 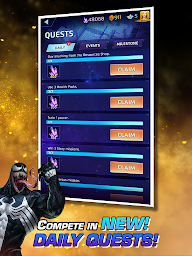 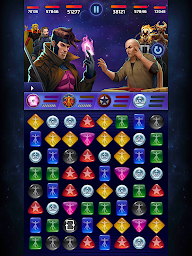 The series of games about the MARVEL cinematic universe has returned with a very unique incarnation game. MARVEL Puzzle Quest: Join the Super Hero Battle has a MARVEL puzzle solving the mission, which will surely make you excited from the first time you experience it. Do not hesitate anymore, let’s explore this super impressive intellectual game with us right now!

Marvel Puzzle Quest is a video game published by D3 Publisher and Marvel Entertainment in 2013. It is a competitive puzzle game in the style of Bejeweled. MARVEL Puzzle Quest: Join the Super Hero Battle is set entirely in the Marvel Cinematic Universe. The game has a total of 244 Marvel characters to unlock and recruit. Currently, Marvel Puzzle Quest is available on the App Store for iOS platforms, CHPlay for Android, and Steam for Microsoft Windows.

The story is rooted in Iso-8, and Norman Osborn’s ambition to replace S.H.I.E.L.D. There are five missions to stop Osborn in his worldwide terror. You and the superhero team have a mission to stop Osborn’s crimes to save peace for the world and humanity.

The gems in the game will be added from above when matched. When they are paired, the six colors of the gems on the board will power up to perform special moves. The player must fight until one of them is defeated. When all enemies are defeated, the end of the fight will reveal the winner’s reward. Rewards include one of the in-game currencies, a special unlock, or a gift of a new character. This character can be added to your roster. If you already have that character, it will become an upgrade item. Players must earn points by winning battles, then apply the points to level up and unlock new levels.

Players are tasked with collecting in-game story pieces to unlock new characters, as well as improving existing ones. Each character has a real comic book cover attached to them, which represents the character’s abilities and allows the player to level them up.

Characters in the game

If you’ve played some Marvel games like Marvel Realm of Champions, MARVEL Strike Force, or Marvel Contest Champions, you’re probably no stranger to the system of superheroes in this series. And so does Marvel Puzzle Quest, the game features a host of Marvel heroes and villains, including Spider-Man, Captain America, Wolverine, Iron Man, Thor, Black Widow, Storm, and Magneto, along with lesser-known characters like Moonstone. Marvel Puzzle Quest has become the first video game to feature the character Thor: Goddess of Thunder – the female version of Thor.

Devil Dinosaur is also released as a free character on the game’s anniversary. If you have played for more than 365 days, you can get the Devil Dinosaur character by doing quests to get daily rewards. Other characters have been added since the game’s launch including Blade, Cyclops, and Kamala Khan. As of now, MARVEL Puzzle Quest: Join the Super Hero Battle has 244 characters, including 8 one-star, 14 two-star, 47 three-star, 115 four-star, and 60 five-star characters.

Outstanding features of the game

• Has a community of over 15 million players

• Build your strength and unlock new powers to build the perfect team of MARVEL superheroes, as well as take down all your enemies in battle

• Use collective strength to battle other players in epic battles and events.

• Challenge your team of Super Heroes in PvP Tournaments.

Currently, there is a version to fully unlock the paid functions of the game. MARVEL Puzzle Quest MOD APK version is completely suitable for those who do not have economic conditions, but still want to fully experience the premium features of this superhero game.

Marvel Realm of Champions continues to resonate in the series that exploits the content and characters of the Marvel universe. Do not hesitate anymore, download this exciting game to your device and experience right now. If you have any questions, please visit Noadware to get the fastest advice.

Is it safe to download the MARVEL Puzzle Quest: Hero RPG Apk Mod file from Noadware.net?