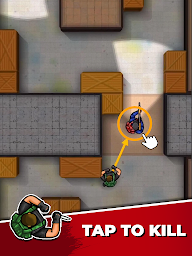 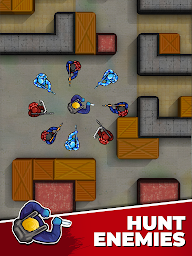 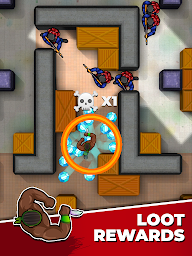 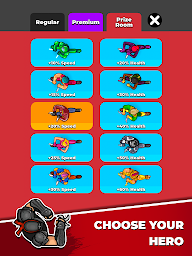 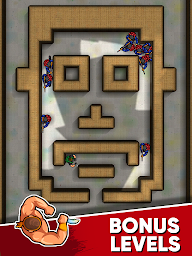 Hunter Assassin is a combining action game, released by Ruby Game Studio publisher. This is a very popular game on Google Play. In the game, you will play the role of an assassin, your task is to destroy all terrorists without being detected.

Do you love sneaky action games like The Greedy Cave, Hello Neighbor, or Neighbors from Hell? Do you want to enjoy the nervous feeling of being an assassin? Hunter Assassin is the game for you.

Hunter Assassin is set in a large warehouse. This is also the place where terrorist gangs are occupying. In that warehouse, there are walls, and wooden crates lined up to form a maze. Your assassination will take place in the evening, and you only have a knife in your hand. Taking advantage of this, you will destroy the enemy, but must be very discreet and silent. If they detect you, they will shoot you to death.

In the game Hunter Assassin, players will play a superior assassin to hunt down targets. The action site is a warehouse with lots of boxes and obstacles. There, terrorists carry automatic machine guns, and flashlights appear in every corner. Your only weapon is a knife, you need to hide and stealth to track. You must approach the enemy in a flash, knock them out unexpectedly and escape without being detected. The surrounding terrain is very important, make use of it to hide from the flashlight of the enemy.

In this game, the most important thing that a player needs to have is running skills and speed. You have to move flexibly, and attack the target from behind. Especially, if you do not want to get a bullet and die, do not let yourself go into the light of the enemy’s flashlight.

The difficulty of the game increases when the player reaches a higher level. On a game screen, you must destroy more targets. Besides, terrorists stop you all the way, cornering you to the end. A tip is to destroy the individual and go first. When there are 2 enemies near each other, distract and divide them before attacking, because otherwise, you are easy to detect.

Every time you kill an enemy, you will gain a certain amount of gems. Use it to learn new skills or unlock new assassins. The new assassins are faster and stronger, helping you overcome the more difficult challenges which are waiting for you at the next level.

Some tips to play the game Hunter Assassin

Move carefully, do not go too fast.

In the game Hunter Assassin, you will have to move quickly around the warehouse and assassinate terrorists. However, you are very likely to go the wrong way. Meanwhile, the game’s navigation system only gives you the shortest distance, not the safest and most effective. That could lead you to walk through dangerous areas and be spotted by terrorists. You can still kill the enemy, but it will consume your resources. That is the health and the number of diamonds earned when defeating the enemy will be less. To fix that, navigate the character moving step by step. Once you’ve figured out how to kill an enemy, tap to move several small steps in succession. This control will help you move in the ideal direction, just as your calculations.

Sometimes, patience is the factor that helps you succeed

Although the game requires gamers to act quickly, instantaneously, but not always like that. Sometimes, you have to wait patiently for the opportunity. You will choose the time to move and act appropriately. Because blindly rushing to the guard will lead you to be spotted, and the game is over.

In Hunter Assassin, there are many characters, each with different attributes. There are very good physical characters, there are characters that move very fast. If you have more health, you will withstand more shots, and the chance to play the game again is higher. But if you have high speed, you will overcome the terrorists quickly. It helps you to attack enemies before being detected. Therefore, please prioritize the speed in the game Hunter Assassin.

Hunter Assassin is a simple game. And of course, its graphics are also simple. But simple doesn’t mean it’s bad. On the contrary, it is that simplicity that brings us humor and reduces the horror in murderous scenes. But not so that lost the bloody scenes. All are simplified to bring light joy to the player.

Game Hunter Assassin has simple gameplay, but it requires gamers to think to plan action. Make the right decisions so you can successfully complete your mission. Can you get the fastest assassin, and destroy all enemies that are hovering in the building? Join Hunter Assassin today! Visit our Noadware regularly to discover more cool games!  Thanks, have a nice day.! Have a fun game.

How can Noadware.net guarantee 100% security for the Hunter Assassin Mod APK?

Is it safe to download the Hunter Assassin Apk Mod file from Noadware.net?